We’ve all been there at some point in our lives (or, in my case, on multiple occasions). We side-glance over at the woman running beside us on the treadmill, grabbing coffee from the office breakroom, or standing ahead of us in the Target checkout line.

We make eye contact for just a second, give each other the automatic once-over, then exchange forced compliments. “Cute outfit.” “Love that nail color.” “Who styles your hair?” It’s a brief encounter, but that’s all it takes for the inner monologue to start.

Dammit. She’s thinner than me. Look at those legs. I bet she does Pilates every morning without breaking a sweat. And then she probably goes to Whole Foods and gets her standard green smoothie with extra kale, of course, because she’s just that disciplined. What possessed me to have a doughnut for breakfast? I think she knows. And she’s taunting me. Better workout harder than usual today.

Sound familiar? We don’t even know this woman’s name, but we’ve created a whole scenario in our minds about how she’s this villain causing our self-esteem to plummet at the expense of her obvious perfection. We’ve labeled her the reason we feel inadequate in our own bodies. We’ve decided that she’s the barrier holding us back from our fullest potential. And in the process, we’ve made unfair judgments—about her and ourselves.

It’s classic Comparison 101, and I’m an expert in the field. I’ve logged decades of practice cursing the size of my jeans, the pimple on my forehead or the bulge in my stomach because those “glaring” imperfections just couldn’t compete with someone else’s radiant complexion and fitness model physique.

I wrote off my own appearance—the features that make me unique—because I never learned to value another woman’s beauty as something more than a personal threat. I didn’t understand that we’re all gorgeous and flawed and gorgeously flawed. We don’t need to mentally sabotage each other to convince ourselves we’re “pretty enough” or “skinny enough” or “fill-in-the-blank enough.”

We just are. As human beings. Period. And one woman’s athletic figure rocking some Lululemon activewear isn’t going to detract from our self-worth once we recognize that everyone is on the same team.

Switching the Emphasis from Comparative to Inclusive

Ultimately, I’m talking about a paradigm shift. We can’t begin to celebrate the diversity and individuality of each other if our thoughts are still fixated on the “comparison game.” Social media, fashion magazines and pop culture feed us a steady diet of material to scrutinize ourselves against. We’ve become so inundated with female body-shaming that we’re turning it into an acceptable norm.

Does a girl on your Newsfeed look amazing in her beach photos? Unfriend her. You don’t need that zero-cellulite tramp in your life. Does some actress on the cover of Cosmo look effortlessly stunning while your version of I-woke-up-like-this equals a messy bun, glasses and oversized sweat pants? Well, guess who’s never redboxing her movies again.

It’s a destructive pattern of rejecting, undermining and degrading for which there’s just one antidote: to change the conversation. Rather than taking offense or feeling inferior to someone else’s beauty, what if we tried this approach instead?

Woah, it takes serious confidence to post a bikini picture on Facebook. I admire her boldness. Maybe I could do that too. Or… She’s an inspiring role model for women’s empowerment. Our society needs more authentic celebrities like her.

I’ve lost count of the years wasted comparing my “trouble areas” with someone else’s “whole package,” and it’s still a chronic temptation to slide back into. But I’ve also realized this cycle doesn’t benefit anyone—least of all me. Shifting my focus from an envied physical attribute to a positive character trait has taught me to personify another woman, rather than objectify her. It’s given me a sense of camaraderie to replace the competition. It’s shown me that we’re all members of a unified female tribe.

We’re all unique. We’re all shaped differently. We all possess intrinsic value. We’re all rare mixtures of endearing quirks and bizarre habits, expressive eyes and infectious smiles, bodies that function to keep us alive and faces that make us stand-out from the crowd. It’s our content as individuals that we need to refocus our attention on. The external framework is just a container for that irrepressible human spirit who lives inside.

Your Turn: It’s Time to Reframe the Mental Chatter

Next time you catch yourself launching into the “comparison game” with another woman— whether she’s a close friend, work colleague or total stranger—I encourage you to pause before that initial judgment goes further. Make a conscious effort to identify an admirable characteristic about her, preferably one that isn’t just surface-level. Now, direct the positive reinforcement back on yourself.

If she’s poised and secure enough to flaunt her natural skin without piling on the makeup (and still manages to look fabulous!), then what’s stopping me? I don’t need to hide under globs of foundation. Who cares about a few blackheads? Chances are nobody will even notice.

The more kind thoughts you express toward both yourself and others, the less urgent it will seem to base your own validation on someone else’s appearance. The most beautiful women support and affirm each other because they understand there’s no room for competing or comparing within our tribe of body warriors. 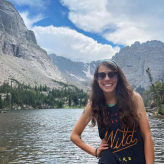 Bio: Mary-Elizabeth Schurrer is a long-time health and fitness writer. As the managing editor of Natural Awakenings, she gets to explore and research a wide variety of health and wellness topics. She’s a regular contributor for MindBodyGreen and is frequently writing new posts for her personal blog Health Be a Hippie. Follow her healthy musings and adventures on Instagram.